Meghan’s highlights from week 1 of the South Africa tour 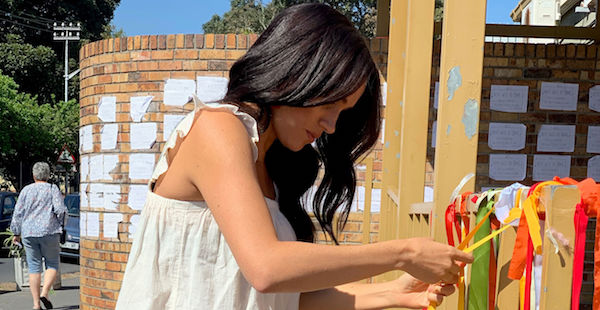 BTW, I’m labeling this the “South Africa” tour because Meghan’s only doing South Africa, and solo Harry is kind of boring ¯\_(ツ)_/¯.

The first thing I want to talk about is Meghan’s speech from her and Harry’s event at Justice Desk in Nyanga, Cape Town. Harry and Meghan both gave speeches. Meghan said:

Hello! It is such privilege to meet all of you today and to start our visit, my first time in South Africa, here in Nyanga. We have just spent some time seeing all the incredible work that the Justice Desk does and of course all of you amazing women and the men who are here helping you, Mbokodo, you are incredible and what you’re doing is so powerful, because you’re all powerful.

The work that’s being done here is to keep women and children safer, which is needed now more than ever. This is an issue that’s been at the forefront of people’s minds here in South Africa, and of course across the globe, particularly over this past month. Please know that my husband and I have been closely following what you’ve been experiencing here – as best we can from afar. But now that we are with you, we are eager to learn and see first-hand the work that you’re doing, the vital work that you’re doing, and that everything that is being done on the ground is making the great change that you not only need but that you deserve.

You have welcomed us into this community, have been open and honest with us, both about the dangers women and children face, and about how you are addressing them. The rights of women and girls is something that is very close to my heart, and the cause I have spent the majority of my life advocating for because I know that when women are empowered, the entire community flourishes. So to be able to meet all of you today who are standing up for what’s right in the face of adversity, I applaud you. We are encouraged to hear your President take the next steps to work towards preventing gender-based violence through education and necessary changes to reinforce the values of modern South Africa.

I do have to say I feel incredibly humbled to be in the presence of all of you as you stand firm in your core values of respect, dignity and equality. I read a quote a few weeks ago and it resonated with me as I’ve been watching what’s been happening here and your active efforts. Maya Angelou, the legendary poet and civil rights activist, once said: “Each time a woman stands up for herself, without knowing it, possibly without claiming it, she stands up for all women.”

Now I know it’s not easy and I know it must feel insurmountable at times, but your commitment to what is right gives all of us hope, especially your brothers and sisters here in your community who need you to continue to shine your light brightly. Your commitment is inspiring, it is energising and it is extraordinary. You must keep going, you must know that what you’re doing not only matters, it is vital because YOU are vital.

I’m actually pretty impressed by this speech – because it set the tone for Meghan’s events throughout this first week of the tour. This opening speech was a good signpost for the rest of the week, and I think it’s a smart thing to do.

I haven’t been able to find a really good video of Meghan’s speech, so here is one from The Sun with clips from both speeches.

The next thing I want to talk about is Archie Harrison‘s visit with Archbishop Desmond Tutu. This photo is darling, and up there as one of the iconic royal children photos along with Prince George meeting Obama.

I hate to be negative, because it’s great seeing how much Archie has grown since his baptism, but I got a bit of an odd vibe when I saw Archie at an official event. The Sussexes want privacy for Archie, which I fully respect, but then it’s odd to see them bring him to an official event. A photocall or public plane de-boarding (which I know they didn’t do) would have been perfect, but it seems counter-intuitive to me to bring him to an official engagement when they’ve said they want him to be private. Not saying I wouldn’t have done the same thing – Archie won’t remember meeting Desmond Tutu, but those photos will live forever – but it seemed odd to me.

Having said all that, it’s great to see Archie, and he’s pretty cute. He reminds me of Harry when he was a baby.

The next thing that stood out to me was a fashion moment. Meghan wore a black Everlane “Japanese GoWeave Essential Jumpsuit” ($120) and gold Gas Bijoux “Onde Drop Earrings” ($200) to a discussion with female entrepreneurs at Work in Progress and a visit to Mothers to Mothers after meeting Desmond Tutu.

Firstly, this jumpsuit is cute, and while the gold earrings are too large for my taste, I like the statement gold and think it paired well with the all black outfit. Secondly, I remember seeing, on Twitter, this photo of Meghan sitting crossed legged on the floor in her heels and jumpsuit and thinking it was so charming. So I wanted to include it here.

This next thing is technically not part of the South Africa tour, in that it isn’t official and doesn’t appear in the Court Circular, but it took place in South Africa and was released during the tour. On Saturday, September 28, the Sussex Royal Instagram account posted a photo of Meghan at Clareinch Post Office in Cape Town tying a ribbon in honor of Uyinene Mrwetyana – a nineteen-year-old University of Cape Town student who was brutally raped and murdered at the post office in August.

“Simi kunye kulesisimo” – ‘We stand together in this moment’

The Duchess of Sussex has tied a ribbon at the site where 19-year-old Cape Town student Uyinene Mrwetyana was murdered last month, to pay her respects and to show solidarity with those who have taken a stand against gender based violence and femicide. Over the last month in Capetown, protests erupted through the streets in outrage over GBV in South Africa.

The Duke and Duchess had been following what had happened from afar and were both eager to learn more when they arrived in South Africa. The Duchess spoke to the mother of Uyinene this week to relay their condolences.

Visiting the site of this tragic death and being able to recognise Uyinene, and all women and girls effected by GBV (specifically in South Africa, but also throughout the world) was personally important to The Duchess.

Uyinene’s death has mobilised people across South Africa in the fight against gender based violence, and is seen as a critical point in the future of women’s rights in South Africa. The Duchess has taken private visits and meetings over the last two days to deepen her understanding of the current situation and continue to advocate for the rights of women and girls.

The post then refers the reader to this New Yorker link in the bio. I highly recommend reading the article. It’s both saddening to read that gender based violence is so prominent in South Africa (Uyinene Mrwetyana being raped and murdered at a post office of all places; a man murdering his children because his wife wanted a divorce – what is wrong with people!?), but also uplifting to read about the protests happening in response.

I mostly ignore the royals’ various IG accounts, and only sometimes pay attention when the royal reporters mention something about it on Twitter, but this stuck in my mind. I think this is an excellent use of social media to highlight something that not everyone may have heard about. And releasing this on a day when Meghan doesn’t have any events also ensures that this particular subject didn’t get lost in the frenzy of four events a day (as would have happened if this had been an official public appearance during the week).

The last thing I will mention is another Instagram reveal. On Sunday, Meghan wrote about a meeting she had with female activists on Thursday. The Court Circular lists Meghan’s only Thursday event as “a Meeting for Women in Public Service, at the Residence of the British High Commissioner to the Republic of South Africa”. As far as I could find, there were no other photos of Meghan from Thursday, so I think these photos are from that event? The background looks “Residence of the British High Commissioner”-y.

On Thursday we convened a meeting of minds – a group of women ranging from a legendary anti-apartheid activist, female parliamentarians, professors, educators and policy makers to discuss the rights of women in South Africa. In the lead up to this tour it weighed heavily on my heart to see the countless violations against women, and I wanted to spend my time on the ground learning about the situation at hand.

One of the guests, Sophia Williams-De Bruyn was just 18 years old when in 1956 she led 20,000 women to march on the Union Buildings in Pretoria in protest of apartheid pass laws. She is the last living leader of the march, and today, a symbol of those who fight for fundamental human rights – For her it is simple – she fights for what is right.

Issues of gender inequality affect women throughout the world, independent of race, color, creed, or socioeconomic background. In the last week I’ve met with women from all walks of life – religious leaders such as the first female rabbi in Capetown, grassroots leaders in Nyanga at Mbokodo, community activists, parliamentarians, and so many more.

In sitting down with these forward thinkers, it was abundantly clear – it is not enough to simply hope for a better future; the only way forward is “hope in action.” I’m eager to spend the next few days in South Africa continuing to learn, listen and absorb the resilience and optimism I’ve felt here.