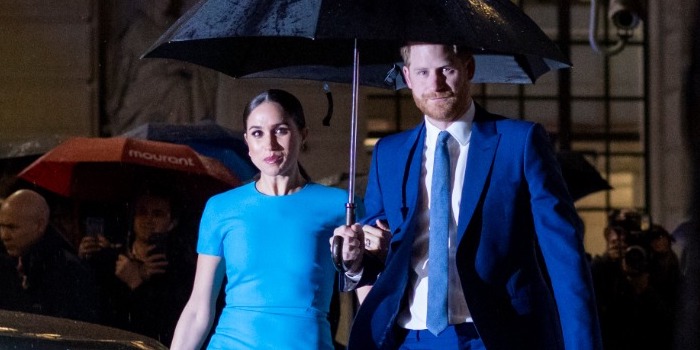 The Duchess of Sussex attended her first appearance since January tonight, March 5, when she joined Prince Harry for the Endeavour Fund Awards at Mansion House. This begins Meghan’s final round of engagements on behalf of the royal family (Harry’s first one in this final round was last week).

Harry and Meghan arrived through the rain, and upon arrival, signed the guest book.

Harry and Meghan then presented the various awards. Meghan presented the Celebrating Excellence award, won by Lee Spencer, to Lee’s wife Claire, as Lee couldn’t be there to accept the award in person. While presenting, Meghan said:

Good evening, everybody. It’s very nice to be back, it’s the third year that I have had the incredible fortune of joining my husband here, and as you all know and can feel it is just the most inspiring space. So, I will say, when we were watching the videos, all the way in Canada, we had the same moment as you, we’re just ‘how are you going to chose?’ So we’ve done our best and, um, I’m very pleased to announce the winner, who is Lee Spencer.

Harry then gave a speech. The Sussex camp has not put the full transcript on the royal website, nor on their own, but here’s a quote they put on their IG.

The Endeavour Fund came from seeing the gaping hole that can be left after taking off that uniform. The power that sport and adventurous challenge plays in recovery, yes; but most of all – the chance to be part of a team again while attempting to achieve unthinkable challenges – as if being shot or blown up wasn’t enough, you guys continue to impress, inspire and challenge what it means to have a life changing injury.

You can view part of Harry’s speech from 2:29 in the video.

Meghan wore a bright blue dress from Victoria Beckham – the T-Shirt Fitted Dress in Turquoise ($1,285.00) – which was a nice contrast to the rain in London. Not among my favorite outfits from Meghan, but far from the worst. I really like her hair in the low pony.

When I first saw the photos from tonight, I had planned on complementing Meghan for switching up her makeup looks, and going for something a bit bolder in the evening (which is still true), but then I saw the below photo and her eye makeup seems to have creased badly, and the eyeliner had some major transfer. This is unacceptable from a makeup artist; whomever did her makeup for tonight needs to be fired.

The rain made for a pretty photographs during arrival.

This appearance did not show up in the Court Circular; none of Harry’s appearances last week did either, nor the Canada House one in January. It’s certainly an interesting choice. The individual offices self-report, so this is a conscious choice for the Sussexes not to appear in the CC.

Here is a video of the event.