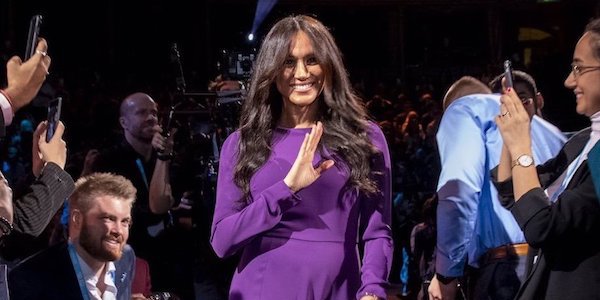 Last night, October 22, Meghan attended the One Young World Summit Opening Ceremony in her capacity as Vice President of The Queens Commonwealth Trust – which partnered with One Young World this year to bring 53 young leaders from across the Commonwealth to the summit in London.

The One Young World Summit is a global forum for young leaders, bringing together 2,000 young people from over 190 countries around the world to accelerate social impact. One Young World’s mission is to create the next generation of more responsible and effective leadership.

One Young World has a quote from Meghan on their article, but I don’t know if it’s recent or from one of her previous outings with them – Meghan was a counselor for One Young World in Dublin in 2014 and in Ottawa in 2016..

When I was asked to be a Counsellor at One Young World my response was a resounding ‘yes’. One Young World invites young adults from all over the world who are actively working to transform the socio-political landscape by being the greater good. They are Delegates who are speaking out against human rights violations, environmental crises, gender equality issues, discrimination and injustice. They are the change.

The ceremony was a two and a half hour long show (judging by the livestream), and the counselors walked on stage about an hour and a half into it. Meghan was the last to walk on stage, you can see her entrance at 1:46:10 in this Facebook video.

The Sussex Royal Instagram announced that later this week Meghan will hold a round table discussion with several of the One Young World young leaders to address the issue of gender equity worldwide.

Meghan wore a repeated purple Aritzia “Maxwell Dress”, which she previously wore in January, and her Manolo Blahnik BB pumps in navy suede (thanks to Mad About Meghan for those IDs).

I love this outfit – probably one of my faves from Meghan. It’s very simple, but the color is stunning. I love purple, and I think Meghan looks great in purple. Two thumbs way up for this one.