Meghan joins One Young World round table, Harry tags along 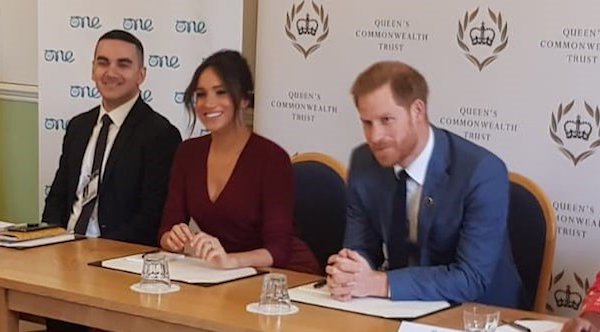 Sussex Royal announced on Tuesday night that the Duchess of Sussex would attend a round table discussion later this week, and today Meghan joined the One Young World round table discussion on gender equity at Windsor Castle in her role as Vice President of the Queen’s Commonwealth Trust. Prince Harry wasn’t announced but he tagged along as he is the President of the Queen’s Commonwealth Trust.

As everyone sat down and the discussion was getting started, Meghan asked if she could say a few words of welcome. She said:

We just want to welcome everyone and say thank you for being here. I mean, obviously, I think we’re aware that One Young World has been important to me for several years, and now being Vice President of the QCT, with my husband as President of it, it just felt like a perfect medley to have these two worlds come together, because what you’re all capable of independently, but then when you work collectively, our intention for today is to try to create somewhat of a task force to be able to see what you can do within your community and then use that same knowledge to apply it to whatever’s happening in all these other communities and territories, and to say, ‘okay, this is just a different version of perhaps the same thing happening, how can we help each other?’

And so in terms of gender equality, which has been something I have championed for quite a long time, I think that that conversation can’t happen without men being part of it. And this is something that is also very key to the way my husband feels, and he’s been working in this space since 2013, which a lot of people don’t notice as much, but I think that’s what’s really important. You can’t have a conversation about women’s empowerment with just women, right, and so for that reason it made complete sense for him to join today, so thank you for letting him crash the party.

My own transcription of the video below

Does Harry’s presence here need to be justified? I’m jokingly saying he’s tagging along, because he wasn’t announced in advance, but as the President of The Queen’s Commonwealth Trust his presence doesn’t feel out of place or anything.

Participating in the discussion with Meghan and Harry were 10 young leaders from around the world who are leading projects that support gender equality and inclusion. These young leaders shared their achievements and best practices for how their work has helped communities overcome challenges and obstacles – the goal being that everyone can take back what they learned from each other and apply it to their own communities.

I love this sweater so much I purchased a similar one from Amazon for $20 – I’ve been wanting a great fall sweater and this pushed me over the edge to finally pick one up. I’m not one for “replicating” royal fashion, but this sweater along with one of Kate’s earrings from 2012 were enough for me to actually purchase something. ETA: I also purchased a pair of burgundy heels inspired by a pair of Kate’s Tod’s from 2016.