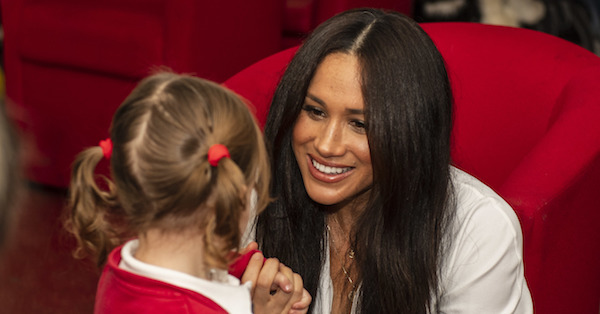 Yesterday, November 6, Prince Harry and the Duchess of Sussex made what was a no press appearance at Broom Farm Community Centre, Windsor to visit with families of deployed service personnel. It was listed in the Court Circular for November 6, which was published at midnight on November 7. Apparently Buckingham Palace had an embargo on the event until 9am this morning, British time, but the royals broke their own embargo with the CC listing. Odd. Anyhoodles, I wasn’t going to cover this, because I don’t cover no press events (I list everything in my Appearance Totals page), but since photos were released here we go.

Harry and Meghan joined military families at a coffee morning at Broom Farm Community Centre located in the heart of the Army housing estate. The royal couple spoke with families from the Welsh Guards, Coldstream Guards, and Household Cavalry about their experiences.

Army&You has some quotes from Harry and from the families they met.

Prince Harry admitted he was in awe of those families who are back home holding it all together. He said: “It’s unbelievably hard. I have so much respect and admiration for anyone who has to deal with that.” Being a new dad to Archie, who turned six months old this week, he also acknowledged how difficult it is for serving parents to be away: “I can’t imagine what it’s like to miss so much as they change so quickly,” he added.

As well as talking to families about the unique challenges that they face such as separation and frequent moves, the Royal couple were also keen to discuss parenting, with The Duchess sharing details of Archie’s sleep patterns and teething with a few of the mums. Amy Thompson, whose husband Brad is attached to the Welsh Guards, explained: “My daughter Aeris is the same age as Archie and we talked about weaning and the children beginning to crawl – she’s just a normal mum and it was like talking to a friend.”

Army spouse Leigh Smith brought along her eight-year-old daughter Molly to meet the Royals. “Meghan promised not to tell anyone that I was off school,” said Molly. “She asked me who my best friend was.”

“We had a party when Harry and Meghan got married and we’ve followed their story ever since,” added Leigh. “So it was an amazing experience for Molly to shake hands with them. It’s really special and a lovely boost for the whole community.”

Coldstream Guards welfare officer, Capt Colin Lewis, said the visit was a welcome tonic after a tough 18 months. “The regiment are really appreciative of the support the families provide by picking up the burden when the service person is away. It’s great for The Duke and Duchess to take the time to truly understand the challenges they face. They are very down to earth, and they’ve had a snapshot of the entire community here by talking to lots of people from different backgrounds.”

Tariq Baksh, from the Household Cavalry welfare team also felt that the couple could relate to many of the families as young parents: “They’re a modern family and completely empathised with people – our families realised that they’re no different.” […]

The visit certainly helped to bring the community together and Helen Llewelyn-Usher, wife of Welsh Guards Commanding Officer Lt Col Henry Llewelyn-Usher agreed that the visit will help families to make new friends: “It’s amazing that Harry and Meghan found time to fit this in to their busy schedule – they shook hands with every single person. It brought together lots of people and now they will always have this amazing memory in common.”