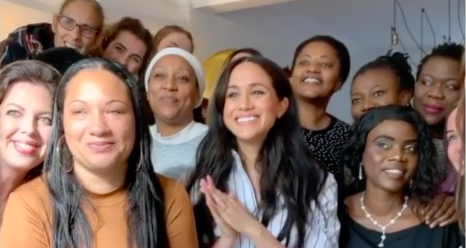 The Duchess of Sussex made an unofficial visit to Luminary Bakery, to open their second location, last week with Bryony Gordon and a photographer from the Telegraph.

A few background notes before we hop into the Telegraph article: While this visit isn’t listed in the Court Circular, the SussexRoyal Instagram posted about the visit and the Telegraph ran an article about it; Bryony Gordon is an old friend of the Sussexes – she ran in the Heads Together marathon, and Harry gave a very personal interview to her in 2017; Luminary Bakery was one of Meghan’s Forces for Change in her British Vogue spread.

I highly encourage you to read the full article as it describes the bakery and how it helps women through training and employment opportunities, and stories of some of the women the bakery has helped. As the article is a bit long, I am cutting out some stuff for space.

The Duchess has been a supporter of [Luminary Bakery] for some time; featuring them in the issue of Vogue that she guest-edited, and today she has invited me to join her on a private visit to the bakery’s newly-opened second branch, to meet some of the inspirational women that Luminary supports.

In this small room, I watch as the Duchess puts Tanya and her friend Giselle at ease. “One of the things I have realised since being here [in the UK],” begins Meghan, “is that people have an expectation when I’m coming somewhere, so I’m like, let’s just be really relaxed, keep everyone nice and chilled, because at the end of the day we’re all just women. We all have a story to tell, and I feel honoured that I am getting to hear yours.” […]

I first met Meghan Markle eighteen months ago, shortly before she married Prince Harry. We went for lunch at a restaurant in London, sitting in a corner where she went unnoticed and undisturbed. She ate monkfish, offering me some when I expressed my food envy, and we discussed some of our shared passions: mental health, running, yoga. It was, bar the odd talk of the impending royal wedding, no different to many of the lunches I have with girlfriends, and when people asked me afterwards what she was like, I felt a little disappointed to have to answer honestly that she was really not that much different from the rest of us. We kept in touch. It was Meghan who had encouraged her then boyfriend to do the podcast about his mental health with me, and I felt we were on the same wave-length.

I saw her a couple of weeks before the Tom Bradby interview came out, just after they had got back from their tour of Africa. Then, as in the interview, her eyes glistened when I asked her how she was. But if I have learnt anything about Meghan in the time I have known her, it is that she is a doer, not a wallower. She lives in the solution, not the problem. She told me that she didn’t want people to love her – she just wanted them to be able to hear her. I have found that this is what the Duchess of Sussex stands for: using her voice to help give one to people less privileged than her. So that is what we set out to do. Certain sections of our still buttoned-up society may not like it, but the Duchess of Sussex is, by giving the kind of open interview she did to Bradby, also giving the women she is meeting today permission to be open.

There is a point where Tanya apologises for her tears. Meghan reaches for a box of tissues and hands them to her. In this room, these apologies are not necessary. For the Duchess of Sussex, showing vulnerability is not a weakness. On the contrary – it is one of humanity’s greatest strengths.

“I was talking about this with someone the other day,” continues Meghan. “We get into this habit of wanting things done immediately nowadays. There’s a culture of instant gratification, of the instant fix. But we aren’t mechanical objects that need to be fixed. You’re a wounded creature that needs to be healed, and that takes time. And that’s what I love about this place. It gives you the support to heal.”

The Duchess’s critics will no doubt turn their noses up at this language of healing. But the Duchess is not doing this for them. She is doing this for women like Tanya and Giselle. Women like Monica, who came to Luminary after being trafficked and beaten to within an inch of her life, and who now shares her apron with the Duchess so that she can join her while baking. Women like Halimot, a victim of child exploitation who, thanks to Luminary, can proudly show Meghan the business cards she has just had printed out bearing the name of her new catering company. These are the people who matter to Meghan Markle.

In the days since the Duke and Duchess of Sussex’s interview with Tom Bradby, there has been much speculation about the couple. They are in torment. They are at breaking point. They are planning to flee the country and move to America. In reality, though, the situation is not quite so attention grabbing. For one, there is the not so small matter of a six month old baby to deal with, and all that this entails (weaning, feeding, an almost permanent state of exhaustion – Meghan tells me that while her husband has flown to Japan in his role as a patron for the RFU, she and Archie will be watching the final tomorrow morning, Archie in an England babygro. “Go England!” she beams). But secondly, I get the distinct impression that Meghan has accepted the strange situation in which she finds herself: she is damned if she does, and she is damned is she doesn’t, and being the kind of person she is, she’s going to carry on doing, thank you very much. […]

It is hard to believe, in the current climate, that just two and a bit years ago, when I did my podcast with Prince Harry, he was lauded for speaking openly and honestly about his feelings, and how close he came to a breakdown. Now that same openness he was once praised for is – in some quarters at least – being used against him. Whereas in 2017 he was a huge force for good, helping men in particular to realise that mental health issues can happen to anyone (suicide is still the biggest killer of young males in this country), now he stands accused of being too privileged to be allowed to express anything other than endless gratitude. But there is no doubting that this openness and honesty helps the couple to connect with people on a level that other royals might struggle to reach.

Meghan, in jeans, Adidas trainers and a shirt today, is pretty quickly absorbed into the task in hand, rolling up sleeves, decorating cakes, and taking time with each woman to hear their story. “I find that when you strip all the layers away, as people, and especially as women, we can find deep connection with each other, and a shared understanding,” she says. “Our lives may be different, our backgrounds, our experiences, all varied, but I find that in these moments of connection it becomes abundantly clear that our hopes, our fears, our insecurities, the things that make us tick…. well, those are very much the same. And there’s comfort in that.”

Later, as I make my way home from the bakery, I think about her ability to transcend pomp and circumstance. Some accuse of her of being too Hollywood about her royal duties, but I don’t think that really nails it. I think she is probably just a bit too human about them.

Bryony Gordon is not my cup of tea as a journalist, to be honest. She’s royal-friendly to the point of absurdity at times – when she defended Prince William from cries of laziness her hyperbolic writing was almost insulting. I get the same feel from this article: a hyperbolic defense that completely misses the point of the criticism.

At least for me, the problem with the Bradby interview was not the openness, it was the timing – it was two extremely privileged royals complaining about parts of their life with a backdrop of impoverished and violated people.

So while this article is fine – and it’s nice as a royal watcher to get some behind-the-scenes info on private visits – I have to roll my eyes at parts of Gordon’s commentary.

Another thing I will stop mentioning eventually, but not today, is that this article is part of the game that Harry said he didn’t want to play. This article is PR from a friendly journalist designed to change a narrative.

To be fair to Harry, he said he “will not be bullied into playing a game that killed [his] mum.” But I’ve always got the impression from both Harry and William that they just don’t want to play the game by the press’ rules, not that they don’t want to play the game in general. They want full control over the narrative. Which this article is. It’s a friendly journalist who has long defended the royals who only got access to this visit because camp Sussex was assured a positive spin.

Not that PR is bad. There have been enough randomly negative articles about Meghan that it’s fine for Meghan and Harry to make a positive one. But there have been many times over the years where Harry and William say one thing and then do another. ¯\_(ツ)_/¯ I’ll stop harping on it eventually.